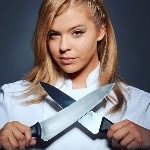 Lara is a young and passionate cook from Ibiza, Spain. She was culinarily mesmerised since she was a toddler, when she would spend most of her time in the kitchen with her mother. She lived in Galicia for a few years, where she found herself truly connected to nature's gifts: the beautiful seafood and the freshest ingredients that the North of Spain has to offer. Lara cooks with her heart and soul, which she believes are the main ingredients to success. She began to pursue her culinary journey at the age of fourteen. From working in modest cafes, restaurants, bakeries and ice cream parlours, it was a combination of wide eyes, discipline and curiosity that led her to work alongside some of the world's most prestigious chefs and at restaurant venues that she had always admired. Such as The Ritz London, where she joined John Williams’ brigade, Hide restaurant by Ollie Dabbous and the two-Michelin starred Claude Bosi at Bibendum. Following the current world situation, Lara began working as a private chef for clients across the UK, as well as offering international bespoke services. She teamed up with a bunch of adrenaline junkies, including hardworking Michelin-star trained chefs, bartenders and sommeliers to offer you a ride of the senses through the palate... and so Euphoria was born.