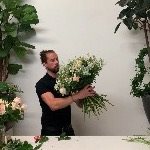 Cyrill studied the applied arts before going to Floristry school in Le Mans, France (where he is from) in 2005 and being drawn into the world of floral design. He was a finalist in the 2012 Coupe de France des Fleuristes (The French cup of Florists) afterwhich he moved to London to work at the luxury Florist Mc Queens where he worked for over three years before establishing in own company in 2016. As with many young Florist, he draws inspiration from the world of design, architecture, music, fashion and art. His most dramatic works are in collaboration with photographers on joint commissions for magazines and fashion brands Being based in London’s vibrant East End, means there is an energetic and artistic community on his door step, one that constantly provide him with new inspiration. That inspiration as allowed him to diverge from the usual traditional arrangements for events or occasions and moving to arenas where floral design is not usually seen.