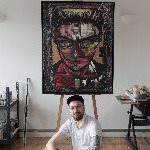 Romanian born artist Andrei Alexander Anton-self-taught artist that uses his painting as a form of expression and escapism, producing what can be described as a modern medley of styles. Born in Timișoara, Romania he studied Development and Public Construction and had little exposure to art growing up. His interest in art and figural subjects was formed by his travels and experiences through out Europe. His work defies strict formal conventions of artistic practice; pushing the boundaries of material aptitude in an expression of abstracted thoughts and feelings. His mixing media masterpieces are the product of two years experimentation with different styles and painting materials. While the majority of his work is painting using acrylic and glue, he often tests the compatibility of mediums such as oils, spray paint, pen, and charcoal. This experimentation facilitated profound connection to and understanding of his materials, shown in the rawness of my style and sound application of colour. Often surprised by the choices he makes throughout the creative process, the intrigue for him as an artist lies in the inexactitude of the painting technique. The current developments of style with the certainty of future growth and style evolution given the works’ highly experimental nature. Themes of nudity and the female face command his attention for the challenge they present in their representation through painting, facilitating his drive as an artist to constantly test his technical abilities. Painting from real life references grounds his subject matter in reality but the enjoyment of the painting process for him is in the complete release of his inhibitions; letting his mind design the finished composition in an almost meditative flow of ideas. Although he might describe his artistic journey as a series of chance happenings, his absence of formal training frees him from the accurate expression of forms as they are perceived allowing him to visually conceives true perception of all things.